Picnic on the Grass (1959) is one of Jean Renoir’s least known works. For the name, the director looked to a synonymous painting by Édouard Manet (1862/63). In reality, however, the film is an homage to his father, Pierre-Auguste Renoir. In other words, his father captures the flickering light and primal joie-de-vivre of France’s south with a brush and paints, while the son takes up the camera instead. This is the closest approximation that can be found for the concept of painting movies. 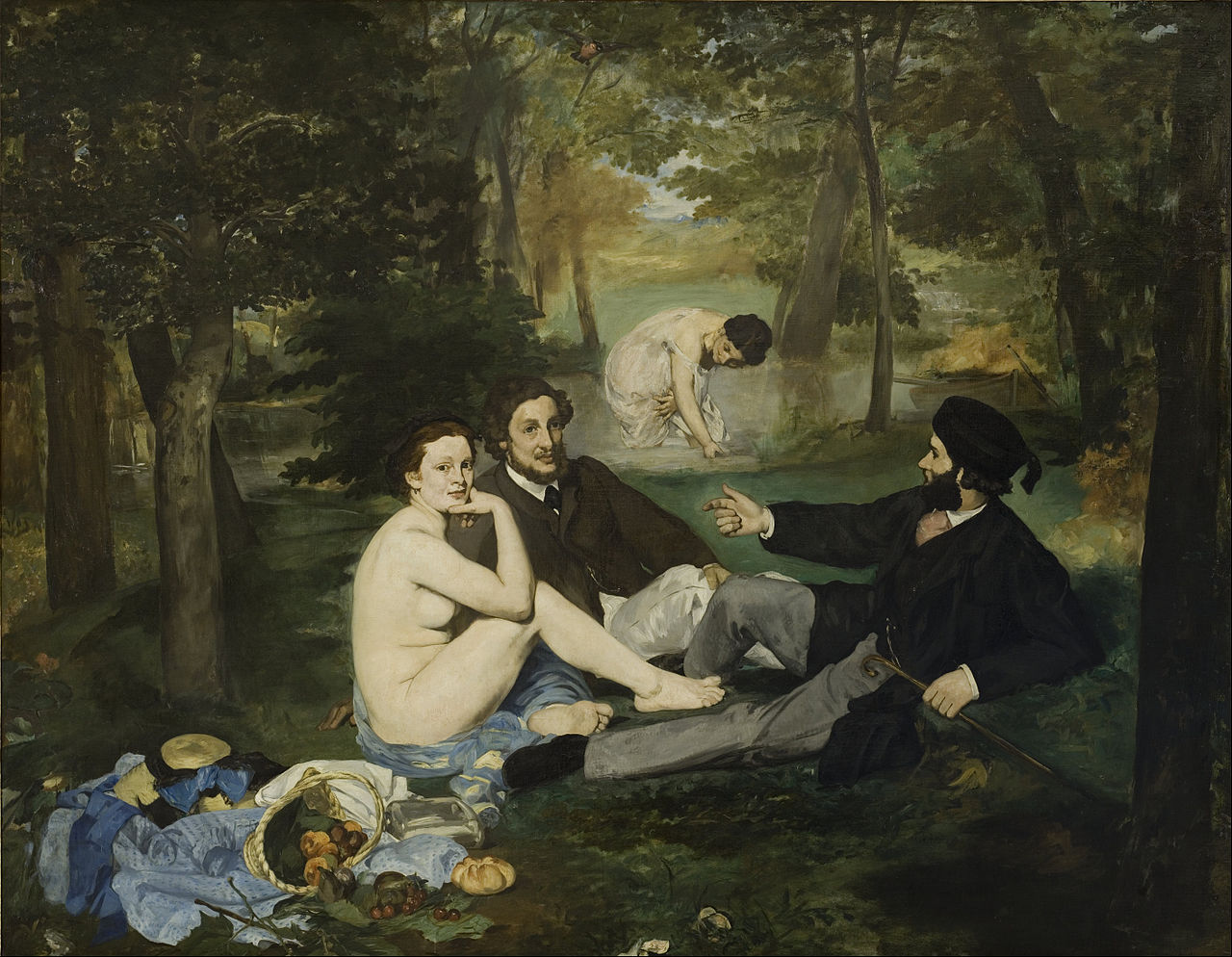 The plot of the film, in contrast, takes more of backstage role compared to the work’s visual aesthetic. The story is quick to set out: a famous biologist and European politician wants to help the world to achieve a better future through the use of artificial insemination. During a picnic to celebrate his engagement, he meets a country girl and gives himself over to the lusts of nature. “The recurring central conflict in Renoir’s oeuvre between order and disorder is played out here in the stand-off between science and nature; the power of the senses and joy for life triumph over scientific progress.” (Arsenal 2007)1

In contrast to the Soviet film-makers of the 1920s and 30s, Renoir places less value on the montage than the image composition and movement of the camera. The setting is framed using strongly divided planes. This clearly shows his intense interest in the people as well as the landscape which surrounds them. “His fascination for objectivity and nature is legendary, even if it is frequently mistaken for simple realism.” (Arsenal 2007)2. This early work of Renoir can actually be attributed to the poetic realism of the 1930s and 40s and is characterised by simulations of reality and social critique. 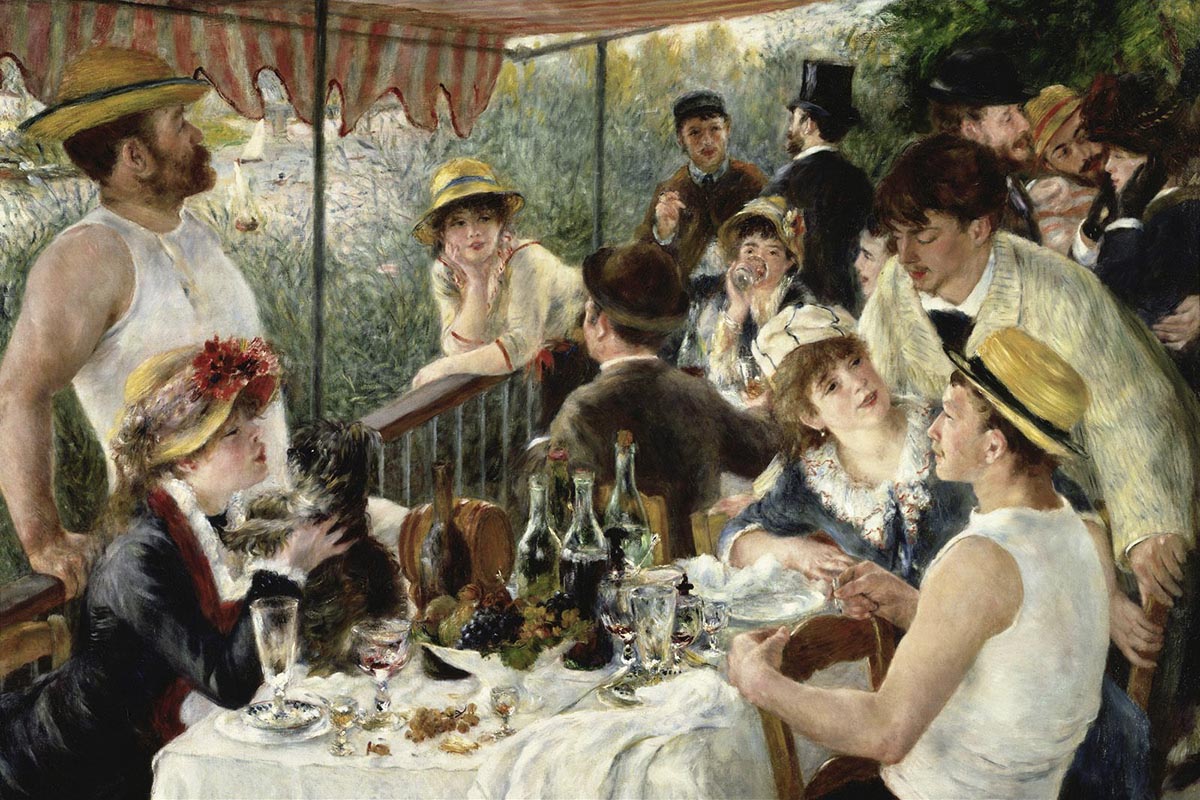 Luncheon of the Boating Party (1880–81) by Pierre-Auguste Renoir served as the template for the transferring of the painting style to the luncheon scene of Jean Renoir’s film. The painting depicts a rowing party and friends sharing breakfast. While the bowls and glasses in the foreground appear almost as still life, the people behind exude vitality and joie-de-vivre. The conversation is being held across a variety of levels with some excitedly participating and others at slightly more of a distance. A similar effect can be found in the representation of social classes – clothing encompasses straw hats and undershirts through to top hats and dress suits. “The painting also reflects the changing character of French society in the mid- to late 19th century. The restaurant welcomed customers of many classes, including businessmen, society women, artists, actresses, writers, critics, seamstresses, and shop girls. This diverse group embodied a new, modern Parisian society.” (Phillips Collection)

In 1936, Jean-Renoir was already drawing on motifs from Luncheon of the Boating Party in his film A Day in the Country (Une partie de campagne). The film recounts an excursion to the countryside at the start of the 1880s by a mother and daughter who have been invited on a boat trip by two rowers. Although the film was created in black and white, the director is masterful at transposing the sensual and emotional presence of the characters onto the big screen. Jérémy Zucchi attributes the successful transformation of the Impressionist painting style primarily to the camerawork and cinematic movement. (Zucchi 2014).

Around 20 years later, Jean Renoir was not only able to pay homage to his father’s painting in colour; rather he also filmed Picnic on the Grass in Les Collettes on the Côte d’Azur, the location where Pierre-Auguste Renoir spent the final years of his life. In his contemporary critique, Gideon Bachmann indicates a highly emotional quality in the film: “Le Déjeuner sur l’Herbe is a unique film – a seemingly effortless pleasantry, impressionistic and yet surreal, full of the unexpected as life is, almost facile in impact but lasting in the perturbations it causes. It is in the true sense a demanding film, but it demands nothing of us save to be ourselves.” (Bachmann 1960)