Marnie is a contentious film. As for financial success, it comes nowhere close to its predecessor, The Birds. And in terms of artistic qualities and cinematic innovation, many critics accuse Alfred Hitchcock of using obsolete techniques and lazy staging. In addition, Hitchcock’s negative attitudes towards women were at the centre of the criticism. When filming The Birds, he had the main actress, Tippi Hedren, supervised by staff and ensured the scenes shot with the birds (real-life birds, not animatronic as promised) would be a nightmare experience for Hedren (see Spoto, 530 ff.). 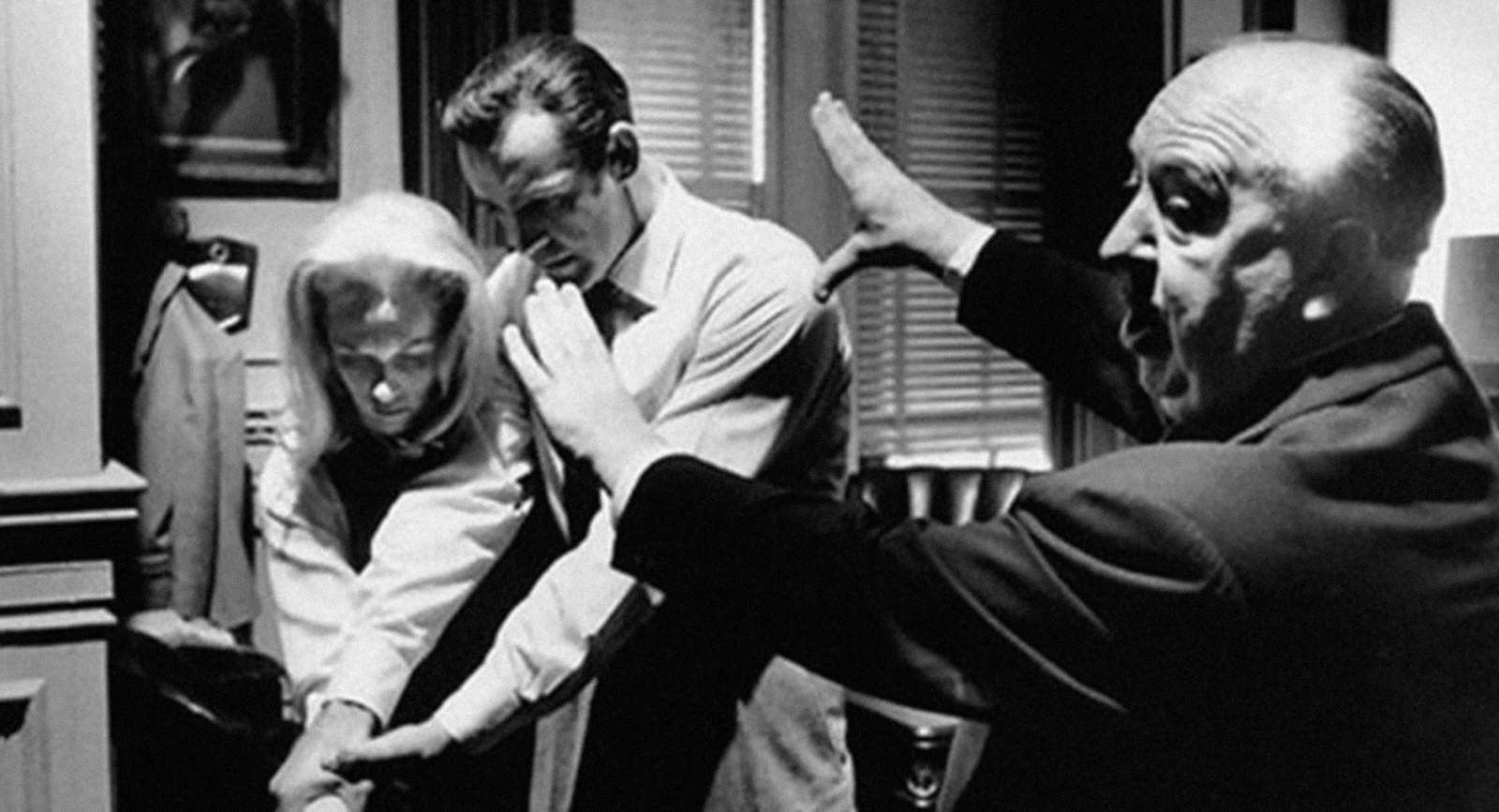 Hedren and Hitchcock on the set. Source: thehitchcockreport.wordpress.com

In her 2016 biography, Tippi Hedren wrote that Hitchcock sexually harassed and abused her during the shooting of Marnie: “I’ve never gone into detail about this, and I never will. I’ll simply say that he suddenly grabbed me and put his hands on me,’ she writes. ‘It was sexual, it was perverse, and it was ugly.” (quoted in Parry 2016)

Marnie provides autobiographical information on the director. The film tells the story of a confidence trickster and compulsive thief who takes a job as secretary at a publishing house under a fake name. However, the publisher Rutland knows what Marnie is up to and keeps an eye on her. After stealing 10,000 Dollars from the company safe, he gives her two options: going to the police or getting married. During their honeymoon, Marnie rejects Rutland’s advances and it leads to an attempted rape and suicide attempt. Marnie starts to suffer from nightmares and anxiety attacks. In the end, Rutland discovers that as a five-year-old child, she killed her mother’s suitor with a poker. 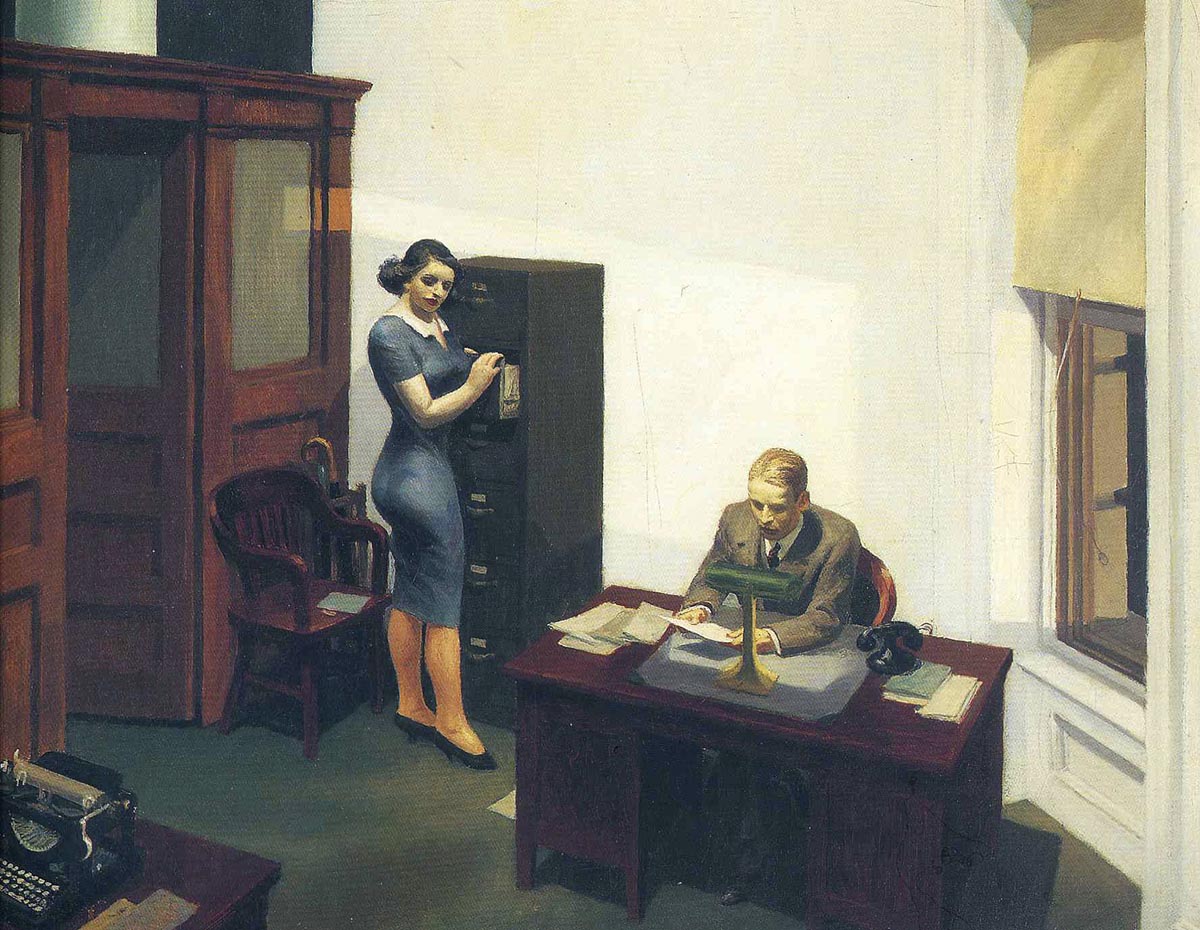 The scene in which Marnie enters the publishing house is visually reminiscent of Edward Hopper’s Office at Night (1940). The 1955 film (Rear Window) and 1960 film (Psycho) draw on Hopper’s images for some cinematic settings. Hopper himself is an admirer of film noir. His images feature strongly accented lighting with long cast shadows. The people depicted are formally isolated – they appear melancholic, sad and lonely. In the opening sequence to Robert Siodmak’s 1946 film noir work The Killers, formal elements from Nighthawks are incorporated as well as the general emotional mood. Nighthawks, on the other hand, was influenced by Hemingway’s short story The Killers. 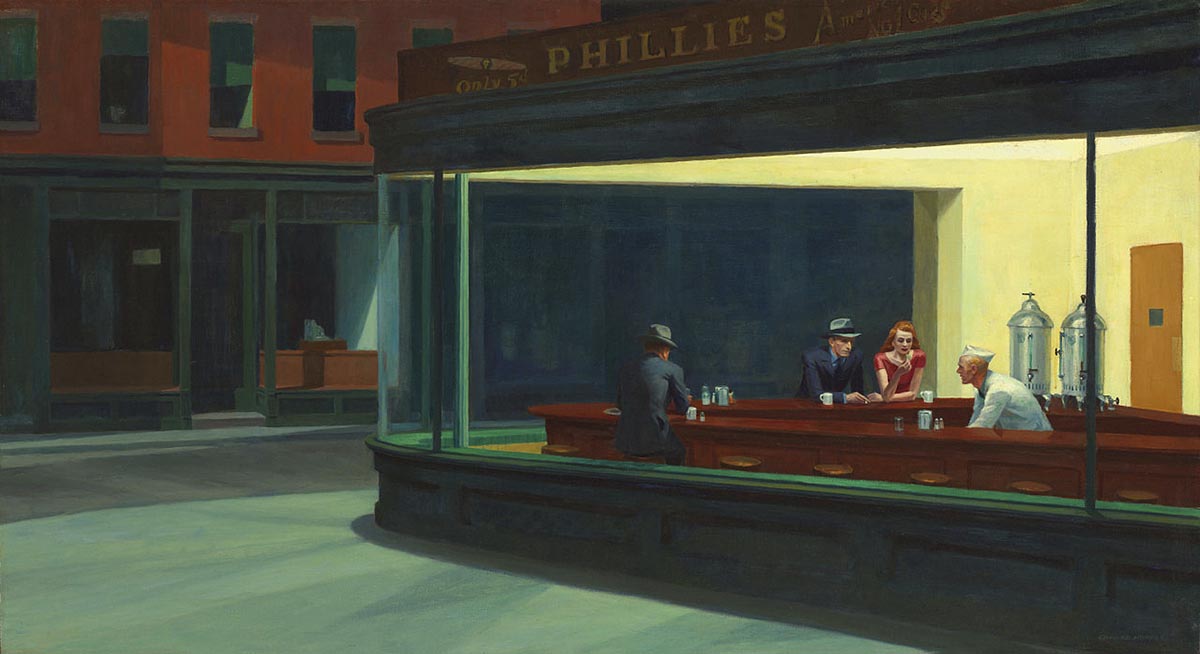 Nighthawks is one of those paintings that everyone knows. References to the picture can be found not only in the visual arts, but also in film, literature and music. Nighthawks has become an icon of American modernity – copied numerous times and elevated to cult status. Hopper observes and sketches the sadness of mundane American life but incorporates a strongly voyeuristic perspective. Many of his paintings are gloomy and melancholic in mood, but at the same time feature a relentless, glaring luminosity. They also point clearly to many aspects yet leave much open to interpretation.

Hopper’s works primarily focus on urban motifs and the loneliness of life in the big city. Office at Night depicts an evening in an office scene with an attractive young lady and a somewhat older man behind his desk. The situation can be easily interpreted in a sexual way. Julie Berebitsky, Professor of History and Gender Studies, provides her reasons for deciding to use Hopper’s painting as the cover for her book, Sex and the Office: “Office at Night is wonderfully evocative: the cramped space and her voluptuous body — it’s hard not to at least consider the possibility that some erotic interaction has already or might happen. The question of who is in charge also seems unsettled. He is clearly the boss, but she conveys agency as much as submissiveness… The painting’s indeterminate narrative allows the viewer to think whatever he or she wants to think about what’s going on.” (quoted in Lauer 2014).