Battleship Potemkin (1925) is still seen as one of the most influential films ever produced. This is primarily due to the method by which Sergei Eisenstein used montage to influence the viewer emotionally and ideologically. The plot of the film ostensibly concerns an actual mutiny on board a Russian warship during the first Russian revolution of 1905, however, Eiesenstein was primarily concerned with the scenery and the deconstruction of typified characters. In the famous staircase scene in Odessa, he skilfully uses these characters to stage the mass uprising of the people against the hated Tsarist regime.

In his first film, Strike, Eisenstein uses a slaughterhouse sequence for a direct, shocking and relentless visual analogy. His montage of visual spectacles is marked by an aggressive moment that psychologically influences the audience: “verified by experience and mathematically calculated to produce specific emotional shocks in the spectator in their proper order within the whole” (Eisenstein 1988, 34). In Battleship Potemkin, Eisenstein increasingly sets his sights on the audience itself, more specifically: the eye of the observer. As the film critic, Leo Mur, aptly put it – Eisenstein not only edited the reel, but also the cells in the brain of the spectator (see Nesbet 2003, 54). 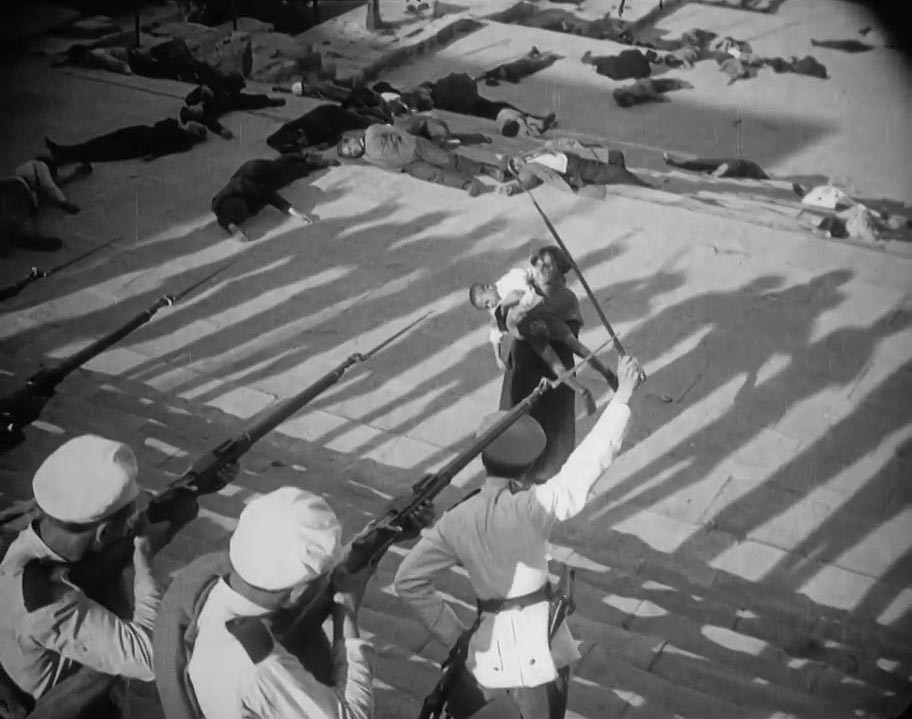 In the staircase scene, Eisenstein far exceeds the possibilities of rhythmic montage. He planned the montage itself as a mutually-dependent dialectic system, and also the image composition as a frame in which to depict the juncture of form and mass. Eisenstein was concerned with graphical conflicts, which he staged with a high level of geometric precision. It can especially be seen in the way by which Eisenstein presents the tsarist Cossacks – not as human soldiers, but as rhythmically organised machinery.

The antagonism between human and machine is also one of the main themes of Soviet Constructivism and the Russian Avant-garde. Constructivists sought to detach themselves fully from the material world and put forward a technically-sound design principle focussing on the geometric construction of surfaces and lines. Abstract Constructivism is also a guiding principle in Cubism. In contrast to Constructivism, however, the transformation of nature still points visually to an external reality (see Kallai 1922). The consequent development of abstraction in Russian Constructivism (and Suprematism in particular), can be seen in the way that individual elements were linked with the intention of creating a new form: “All that was needed was the start of a total activity, to construct from the loose elements a solid, complex unit of form, to make intellectual art embody life in its greatest amplitude.” (Ibid)

In Battleship Potemkin, Eisenstein focussed on both stylistic directions. He is convinced that Cubism (as opposed to Impressionism) is capable of addressing the spectator in a targeted way, which exceeds the mere acts of seeing and perceiving – despite his parallel criticism of cubism being too static to be seen as a means of expression. Granted, Eisenstein did propose that the film was capable of surmounting this limitation: “When we say that in the fundamental structure of film aesthecis there is retained the unique nature of the cinematic phenomenon – the creation of motion out of the collision of two motionless forms – we are not dealing with natural, physical movements but with something that has to do with the way our perception works.” (Eisenstein 1988, 119) 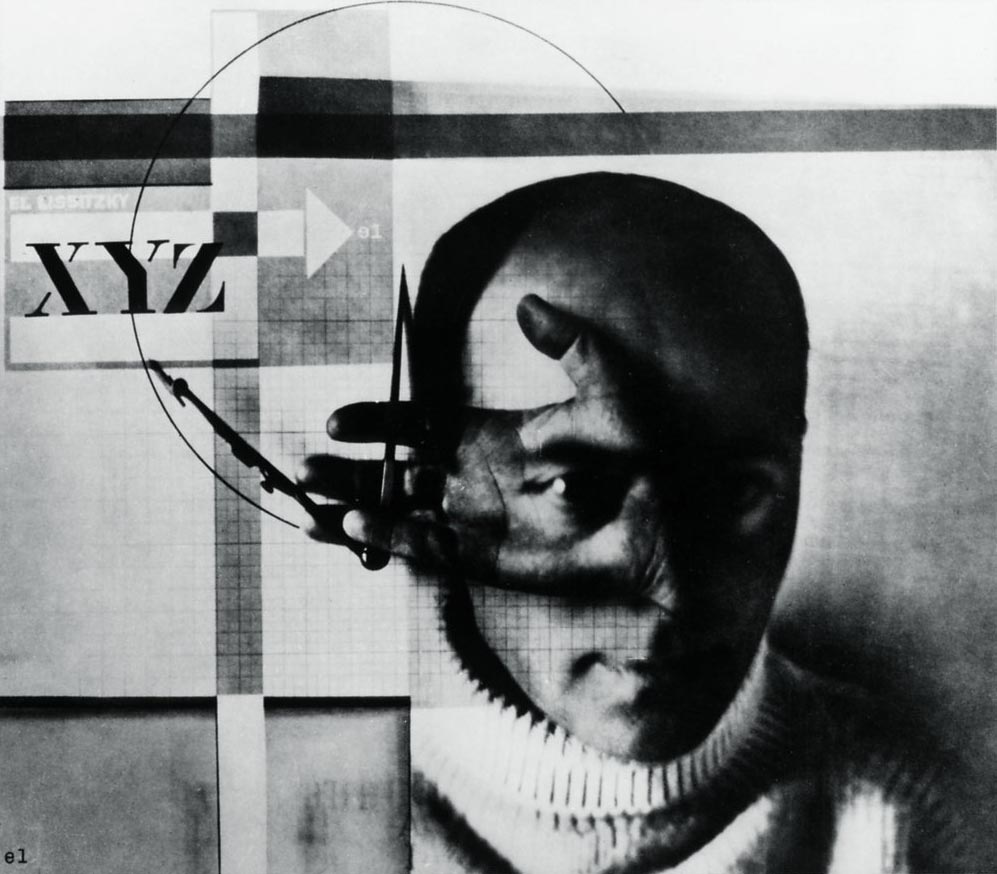 The photomontage The Constructor, created by Russian Constructivist El Lissitzky was published in the magazine Foto-Auge in 1929. Eisenstein was so impressed by this collage that cited it a number of years later as an example of “regression and pre-logic” (see Nesbet 2003, 46). The montage from 1924 depicts the face of the artist, superimposed with a circle and a hand, which draw the gaze of the spectator from the artist’s eye to the centre of the picture. For Eisenstein, the picture symbolises the dialectic tension between concrete and abstract; a perception that is also based on the representation of human beings in Battleship Potemkin.

By 1921, Lissitzky was already working on experimental drafts using which he hoped to bring the ideas of Suprematism into a new dimension. He named this work PROUN, an acronym based on the Russian for ‘project for the affirmation of the new’, which refers to the construction of this new form. In his Manifest & These on PROUN, Lissitzky emphasised the transformation of the artist: “From being a simple depicter the artist becomes a creator (builder) of forms for a new world — the world of objectivity. […] PROUN is understood as the creative construction of form (based on the mastery of space) assisted by economic construction of the applied material. The goal of PROUN is progressive movement on the way to concrete creation, and not the substantiation, explanation, or promotion of life.” (Lissitzky 1920) 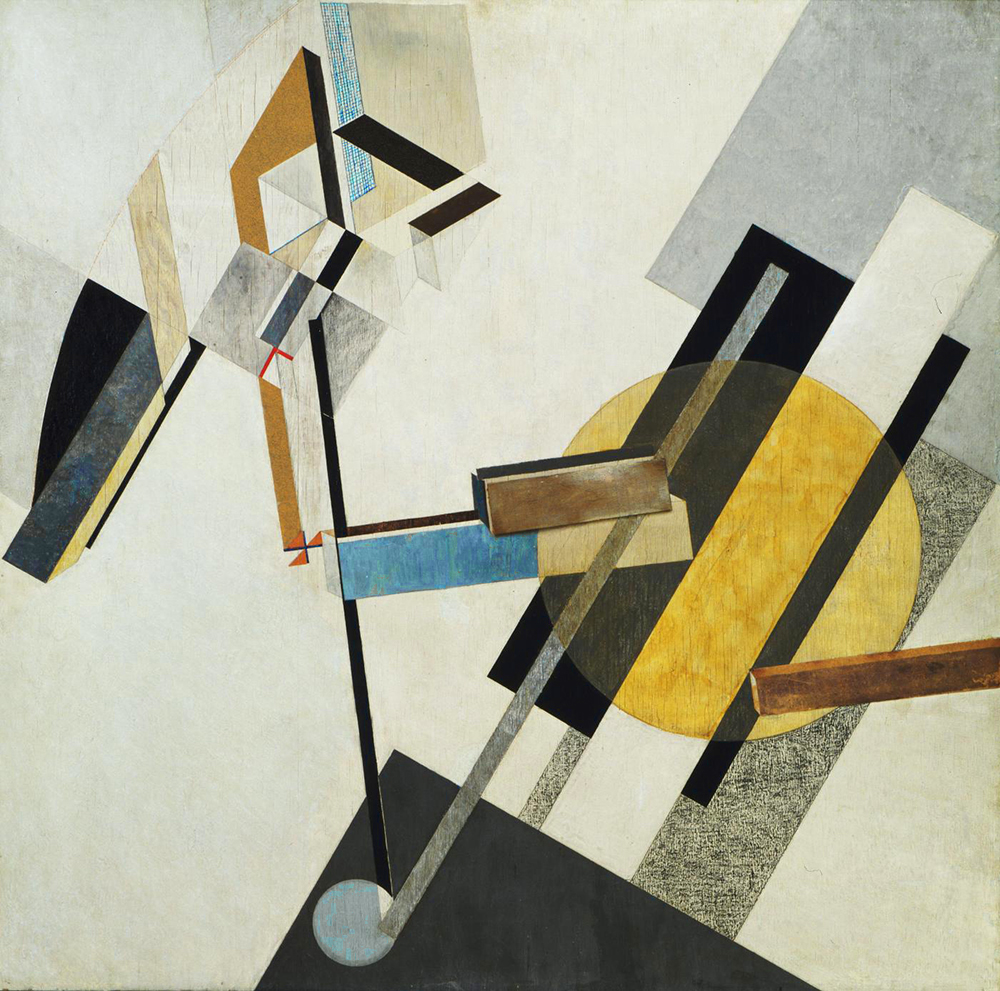 Lissitzky’s PROUN works exhibit a multi-dimensional structure. As in Eisenstein’s image composition and montage, elements, shapes and surfaces bounce off each other in a dialectic sense thereby creating a new image, or entity. The geometry of the image is devised with mathematical precision and the colour palette encompasses nuances in grey tones through to stark contrasts using red, blue and yellow.