There has been much speculation surrounding Office at Night. Many critics contend that Hopper’s painting throws up more questions than it answers. At first glance, it looks like a normal office scene – a man at a desk and a secretary opening a filing cabinet – but on closer inspection, the observer will get a sense of the silence and unsettling nature of this nocturnal scene. Why are these two individuals working at night? What is their relationship with each other? What sort of an office is it?

It is a warm night – the window is open. The breeze has created disorder in the papers on the desk. The light streaming into the office from outside seems to be brighter than regular street lighting. The subjects appear lost and lonely, despite a noticeable sense of tension between the two. The woman by the filing cabinet is wearing a close-fitting dress, her posture is salacious, but her face by contrast is lacking in emotion.

The short clip shows an excerpt of what this type of story could be like. Bringing it to life is often painstaking since all the objects and people require 3D models to be made. 3D artist Nashaat Zakkour designed the office model using Cinema 4D. The people are modelled using Poser and Daz Studio – character animation programs – and then exported in Autodesk-FBX format.

3D model of the woman

Next, the materials and textures of the characters are modified in Cinema 4D and the movement of the characters is animated. Four different shots were exported using the physical render engine to create the clip.

The outside view of the office building is not a 3D model. The image was based on a painting by Hopper – Early Sunday Morning – and created in Photoshop. The freeware FotoSketcher and professional program Studio Artist were then used to simulate the paint style of the image. Finally, the 3D-rendered images of the window shot are combined with the image of the building’s facade in After Effects. 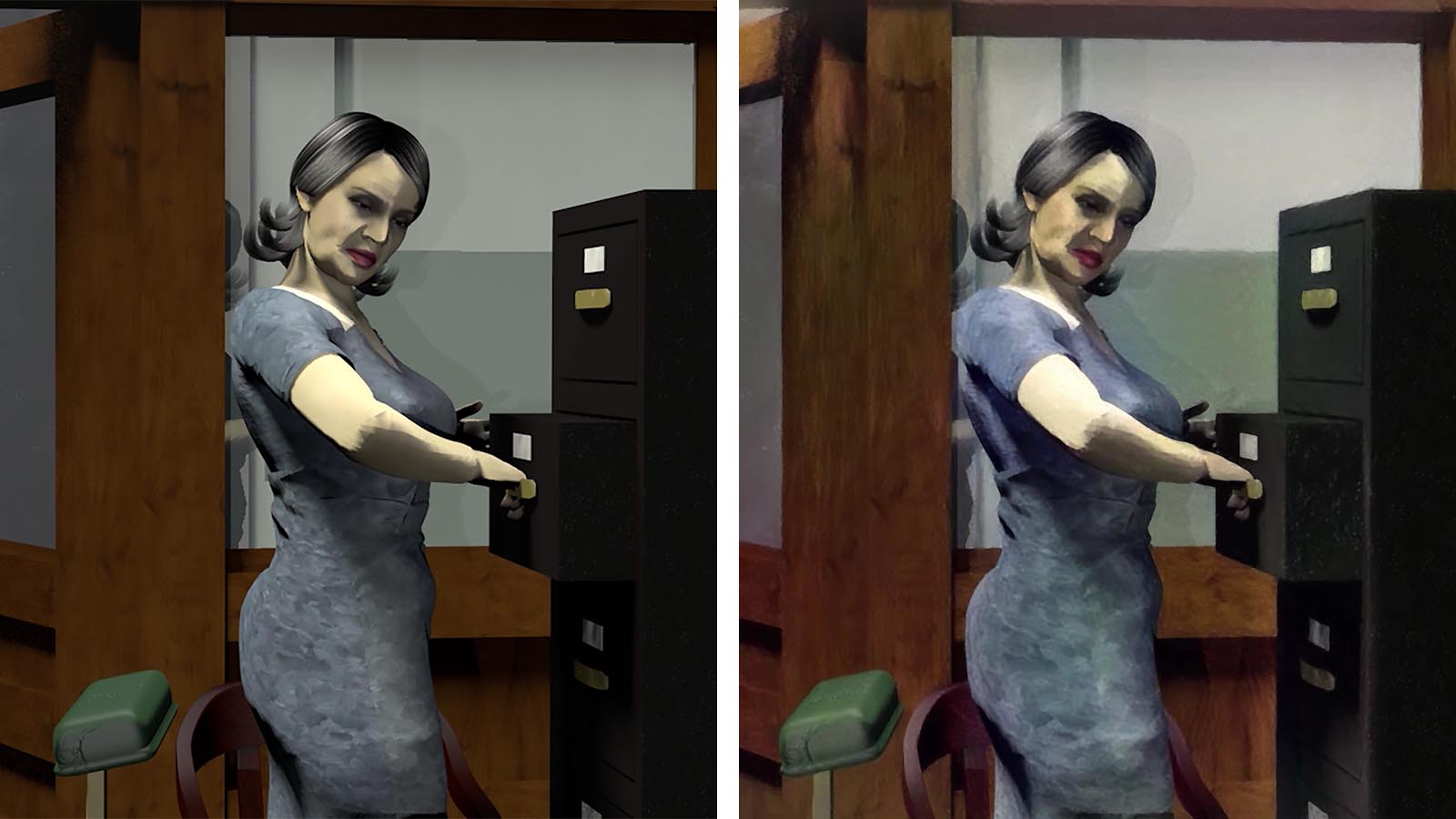 The rough cut of the other shots is performed using Premiere Pro. The clip is exported as a PNG sequence and Hopper’s painting style is transferred to the rendered images using the neural artistic-style algorithm by Leon A. Gatys, Alexander S. Ecker and Matthias Bethge. In particular, the torch implementations by Justin Johnson and Manuel Ruder, Alexey Dosovitskiy and Thomas Brox were used on a system running Ubuntu 15.04. The rendering time for one 1280 x 720 pixel image is eleven minutes using GPU computing (Titan-X graphics card). For details on this process, see the technical Aspects.

The final steps are performed in After Effects, Audition and Premiere. In addition to upscaling the images, fine cutting and colour correction, the main focus here is on sound mixing with audio clips exclusively from freesound.org.